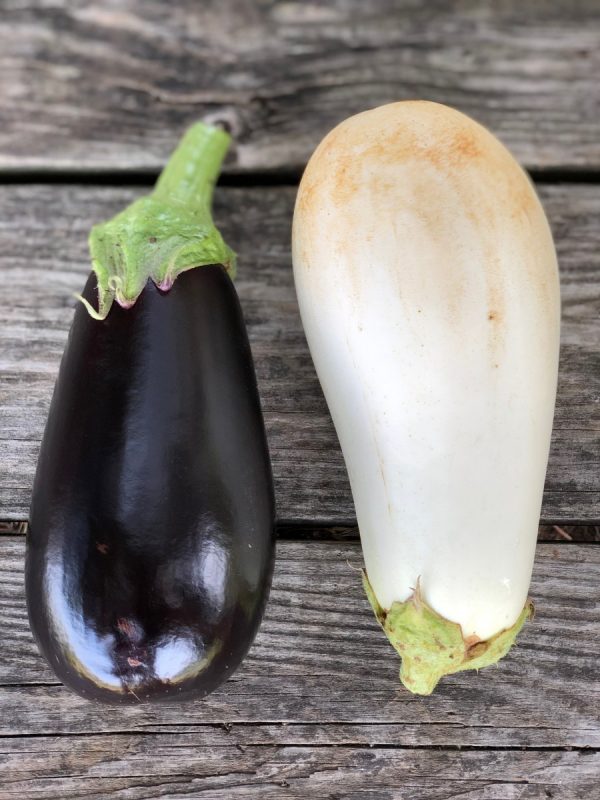 Our standard eggplant-based summer meals are the same year after year: Eggplant Parmesan and Ratatouille. But alas, as the eggplant continues to come in throughout the summer, I don’t always have the time to make these dishes.

The variations for any crostini are endless. At it’s core, a crostini is an Italian appetizer of little toasts with toppings–which makes this a great dish for creativity and using up whatever veggies/herbs/cheeses/meats that need to be eaten pronto.

For my eggplant crostini, I use eggplant (of course!), yellow onion, tomatoes, goat cheese, and mint. 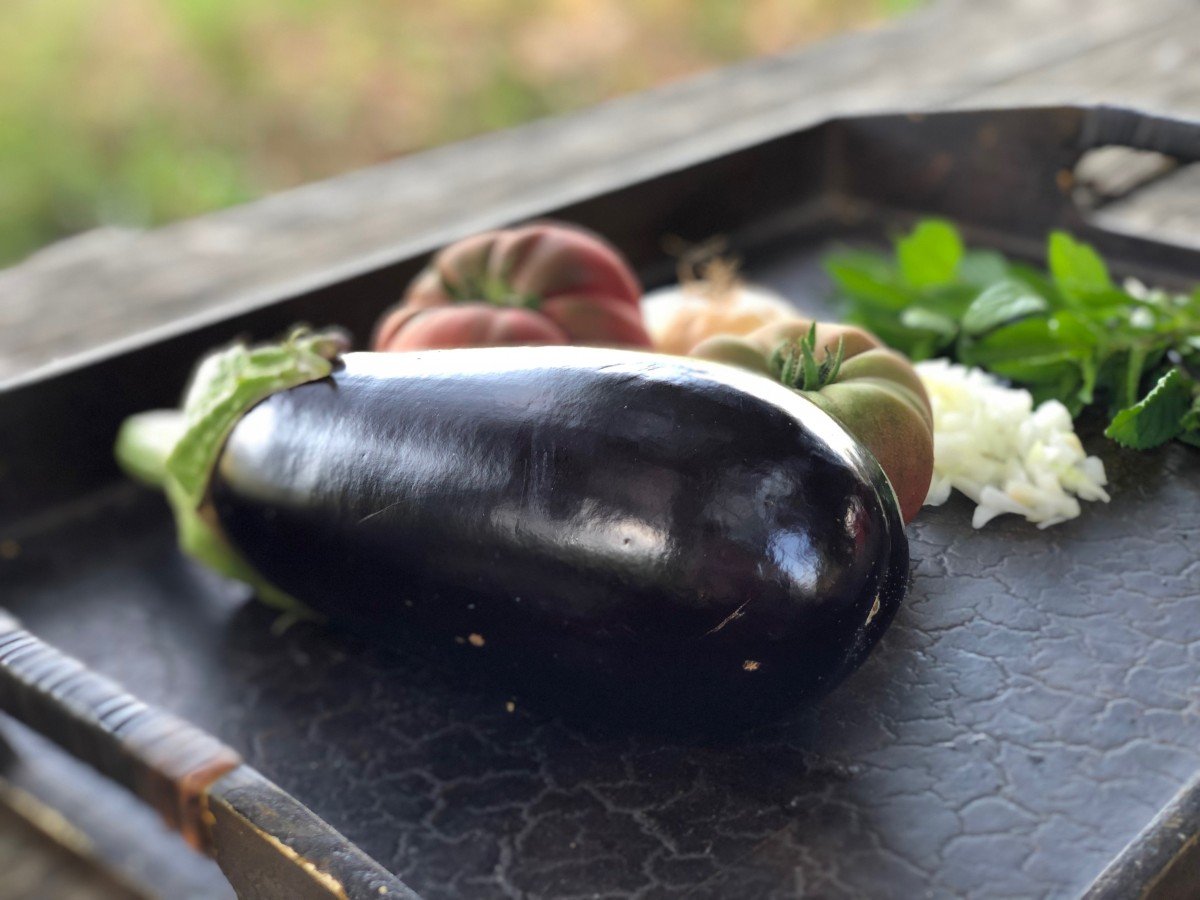 Start by slicing your eggplant into half inch rounds, then salt them on both sides and let them sit for 15 minutes. Tradition has it that salting your eggplant before cooking reduces any possible bitterness, but I’ve read sources that say this step isn’t really necessary if you’re cooking with fresh, high-quality eggplant (which you are if you received it from us!). So if you’re short on time, go ahead and skip this step.

While the eggplant rounds are resting, preheat the oven to 400 F and prep your other ingredients:

Preheat your skillet on medium-high heat. Once it’s hot, add 1 T olive oil. Once your oil is shimmery hot, add the onion, reduce heat to medium, and cook for 4-5 minutes, until the onion is translucent.

While the onion is cooking, rinse and pat dry the eggplant rounds, then chop them into 1/2″ pieces. Add the eggplant to the onions along with another 1 T olive oil, and cook for 8-10 minutes, until the eggplant is soft but not mushy.

While the eggplant is cooking, brush olive oil onto both sides of the baguette slices and place them in a single layer on a baking sheet. Put these little lovelies into the oven for 8-10 minutes, until they brown, flipping them halfway through for toasting on both sides.

Back to the skillet. Once the eggplant has softened, add the tomatoes and cook another 4-5 minutes. Then remove the whole skillet from the stove top and taste for seasoning, adding more salt and freshly ground pepper as needed.

Start by spreading a thick layer of goat cheese on each toast. Next add a spoonful or two of the eggplant-tomato mixture. Finally a sprinkling of the chopped mint. Last step: Bite into this deliciousness and enjoy! 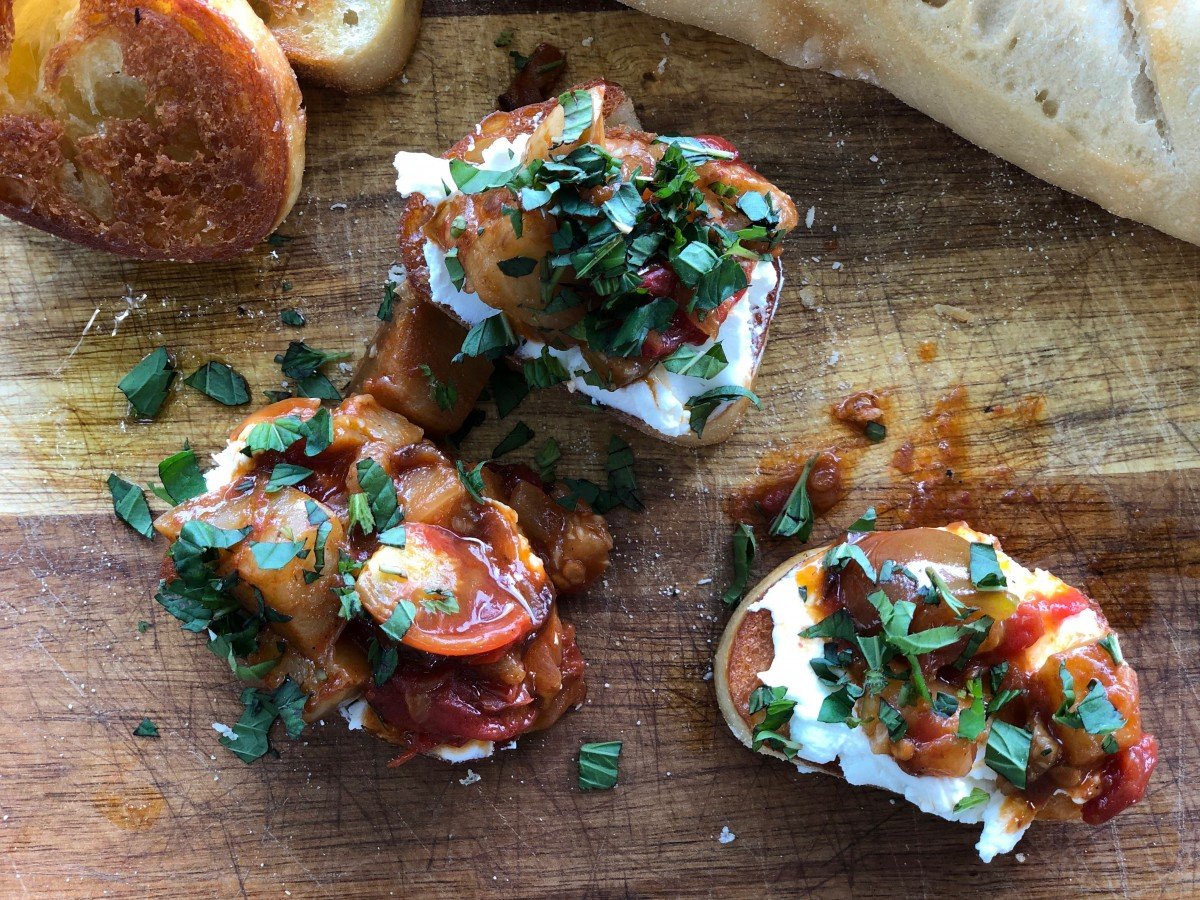 Scroll down for the printable recipe. And share in the comments–what’s your favorite way to use eggplant? 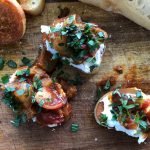