A summer treat we’ve been loving this summer is the blistered shishito pepper. Whether we’re cooking these mild chile peppers on the stovetop or the campfire, we’re using our trusty and well-seasoned 12″ cast iron skillet, olive oil, salt and pepper, and just a touch of lemon juice. That’s all you need to complement the flavor of the pepper itself.

While my children have been snacking on bowls of raw shishitos like they’re potato chips, I much prefer these peppers after they’ve been exposed to high heat as this brings out their sweetness.

A word of warning. 1 in every 10-20 shishito chiles is actually quite spicy! We’ve made this into a game of sorts in our family, with the “winner”–especially if a child–running around in circles while joyously calling for a glass of milk or salt to calm their tongue. Overdramatic in my opinion as the every-now-and-then spicy shishito is significantly lower on the Scoville scale than the jalapeno. In other words, it’s spicy but not that spicy.

One last note. To get the perfect combination of sweet-pepper flavor along with an al dente texture, you’ll want to cook these over medium-high heat. This step is key to a blistered yet crunchy shishito. The last time we made these, the skillet was so hot it was slightly smoking. This resulted in perfectly blistered peppers, along with 5-year-old Arie commenting, “It’s dusty in here!” Open the windows, friends–it’s worth it for these peppers! 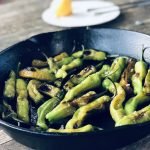 How to Blister Shishito Peppers

Step 2: Toss 8 ounces of shishito peppers in 1 Tsbp of olive oil (or oil of your choice). Use your fingers to spread the oil evenly until all the peppers are well-coated.

Step 3: Once your skillet is hot, add the peppers in a single layer. Don’t overfill the skillet or they won’t have enough room to evenly blister.

Step 4: Let the peppers sit in the skillet for 2-3 minutes. Any longer than 3 minutes per side and the peppers may get mushy. If they’ve charred, it’s time to stir or flip so the other side can char. (My new favorite tool for flipping the peppers are these tweezer tongs Dan got me for our anniversary.)

Step 5: Once both sides of the peppers are browned and blistered, remove from heat. Put the peppers into a bowl or serving dish of your choice and toss with a sprinkling of finishing salt, freshly ground black pepper, and a generous squeeze of fresh lemon juice.