A couple weeks ago I received this delightful birthday card from my son Harper. 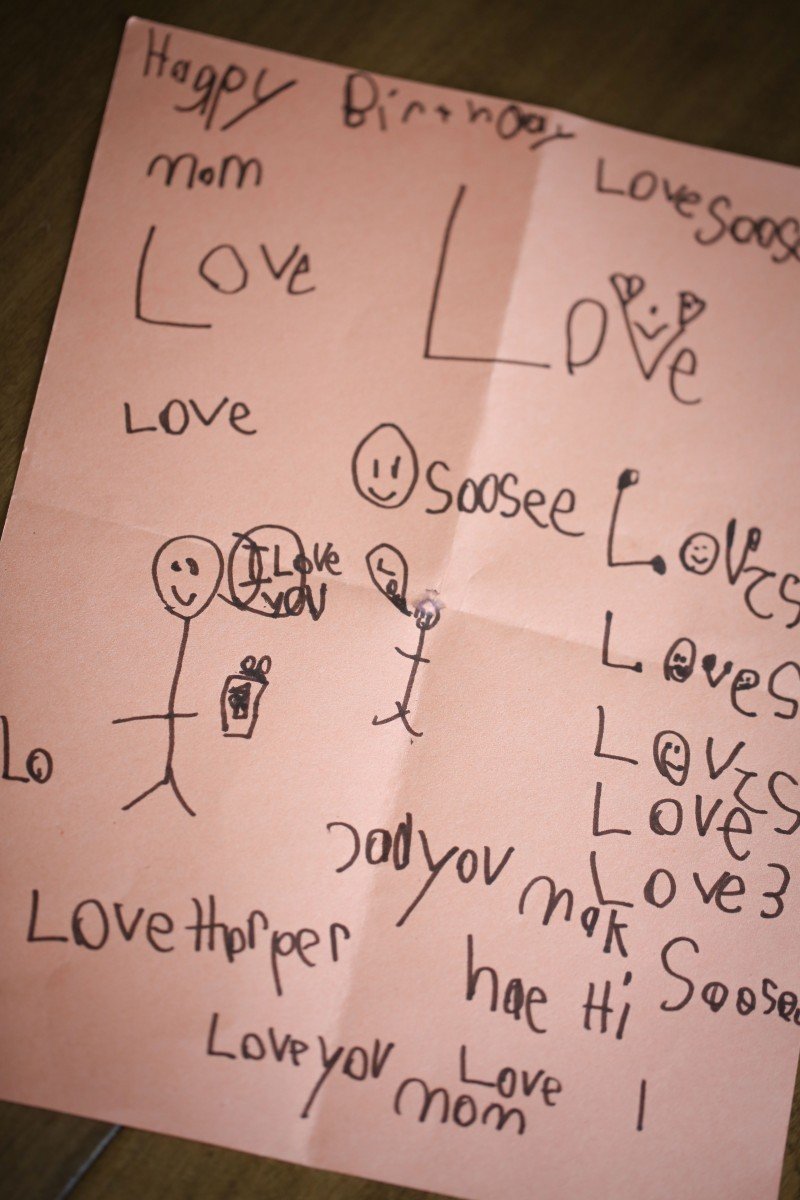 There’s lot of love in this card!  There’s also soosee, which is a mostly phonetic version of—you may have guessed it—sushi!  While Harper has had actual sushi before, at home I only make California rolls, or sushi made without raw fish, but sushi is A TON more fun to say, especially when you’re seven.

After receiving this card, I made a couple rounds of California rolls for my little guy, and he proceeded to have them for lunch three times the following week.  I used kale or spinach for Harper’s filling, but you can use any veggie you want.

Before I get into the recipe, I’d like to give the disclaimer that I really know very little about sushi.  I made sushi for the first time at a friend-of-a-friend’s house in Spain in 2005.  I can’t remember the details, but I’m guessing we used bamboo mats and sushi rice and raw fish.  Fast forward ten years, and I’m still making these little rolls, but in my own super-simplified way.  Anyway, I may not know a lot about sushi or California rolls, but I do something about cooking with veggies.  If you’d like advice from an expert, check out this Food and Wine post featuring sushi master Masahuru Morimoto.

While you’ll probably have most of the ingredients for California rolls in your house, there’s a good possibility you won’t have a key ingredient sushi-nori, or seaweed wraps. 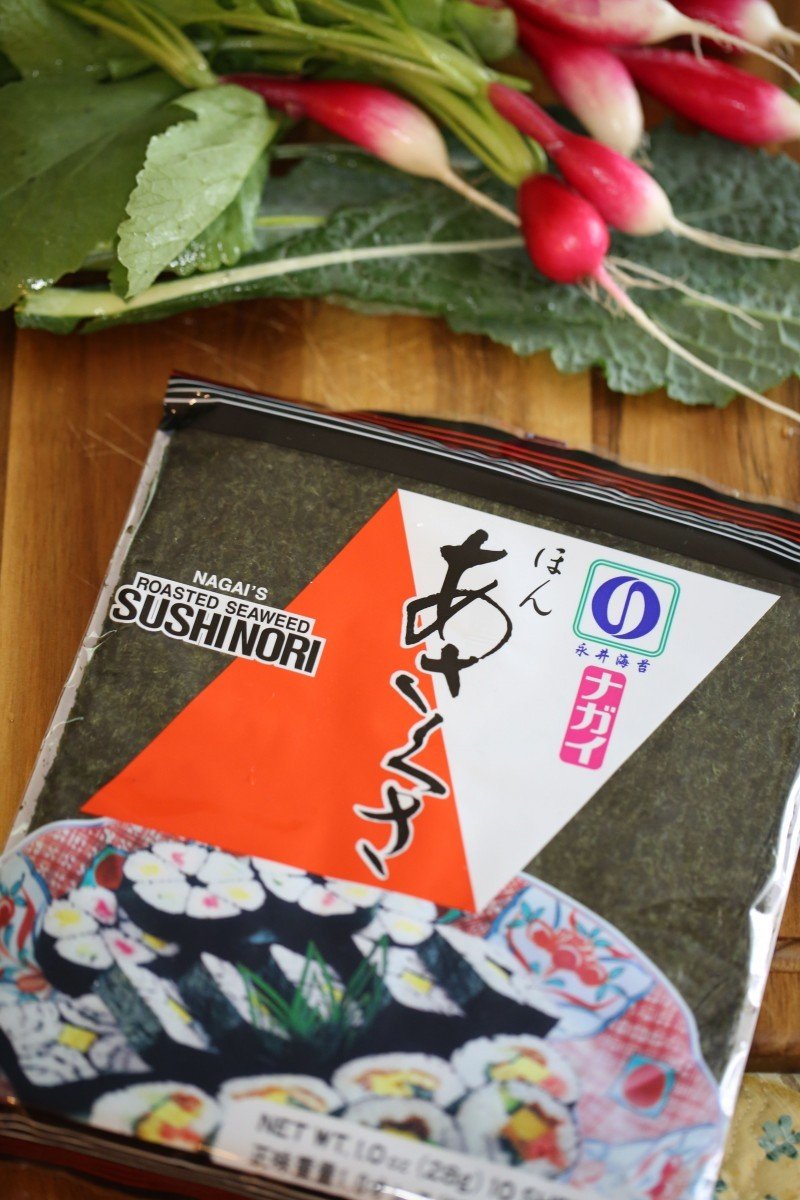 Fortunately, our local grocery store Tysens does carry this ingredient in aisle 2, or you can purchase at least five different highly-rated nori on amazon.

To begin, set up your work space.  I lay out two nori on a cutting board.  Around the cutting board I arrange the rest of my ingredients: cream cheese, rice, sliced veggies, and a little bowl of water.

Spread a thin layer of cream cheese on the nori, stopping within an or so of the far end. 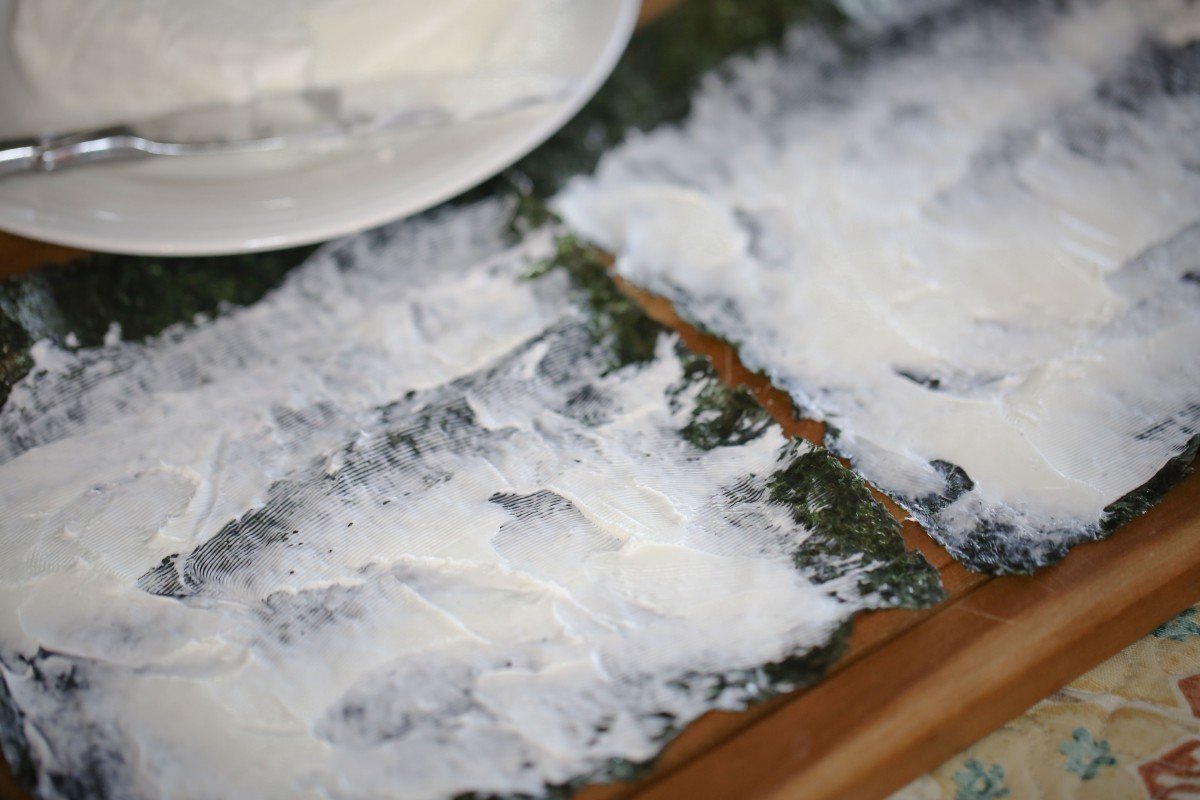 Next, dip your fingers in the water (this will keep the rice from sticking to your fingers), and add a layer of rice over the cream cheese.  Most people use seasoned sushi rice, but since I’m often using these rolls as a meal for my child, I like to use organic long-grain brown rice.  In the sushi world, there are probably rules forbidding this type of replacement; fortunately these rules don’t apply in my home. 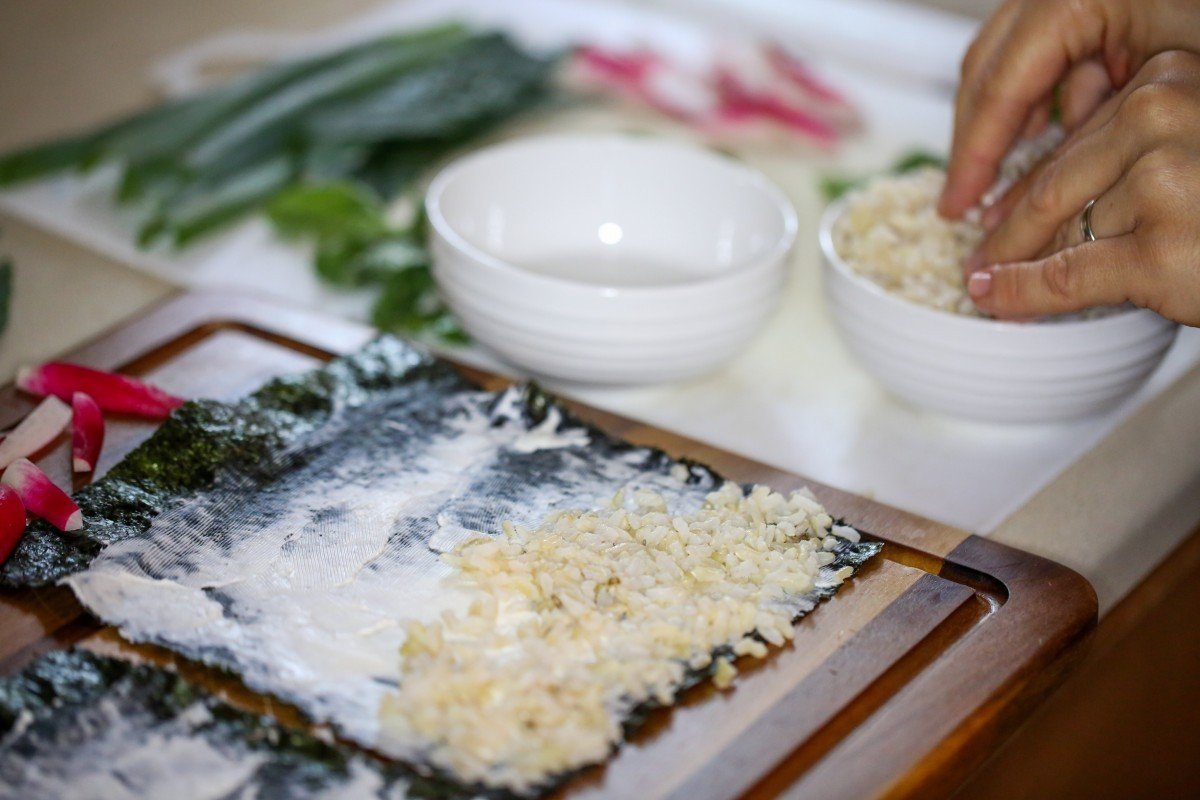 Now it’s time for the fun stuff—veggies!  Try any combination that sounds good to you. I’m going use produce from your share this week: radishes, radish greens, green onions, kale, and/or spinach.  Slice the veggies into strips, then line them up in a row on the edge of the nori that’s closest to you. 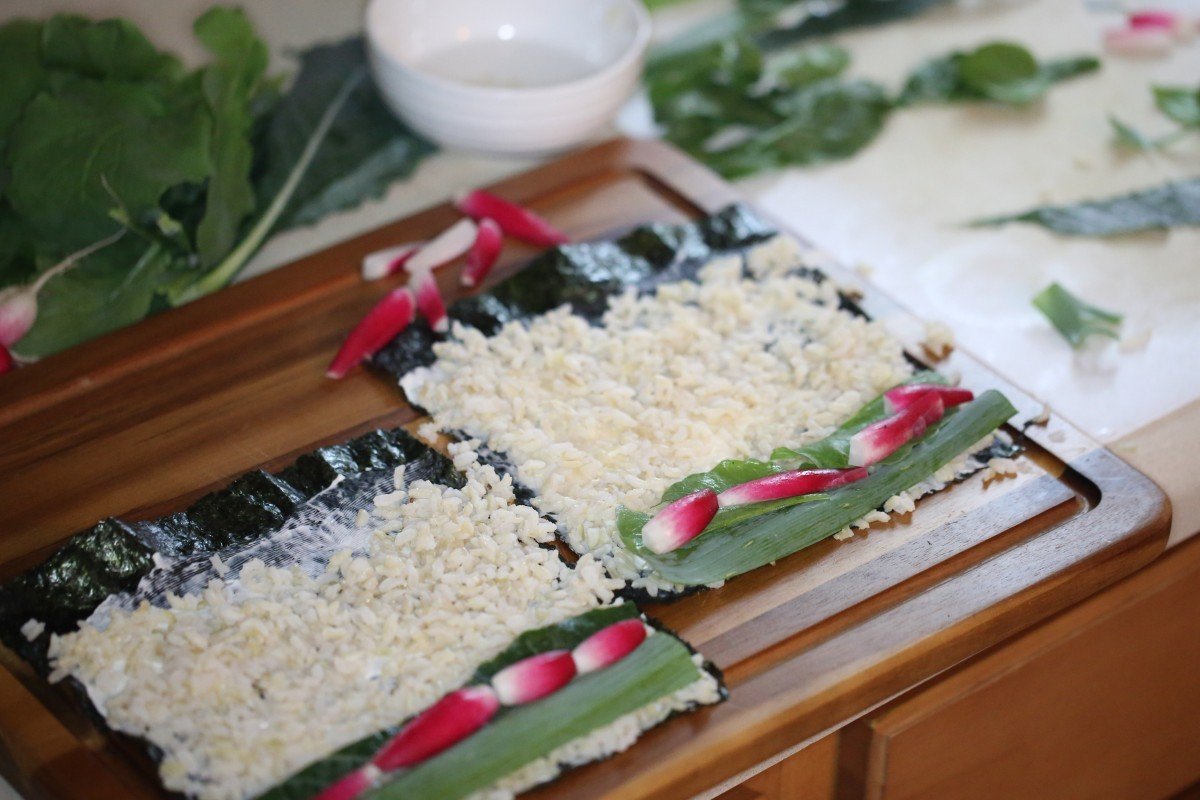 Now, carefully and tightly roll the nori away from you, tucking in the veggies, continuing until the wrap is all rolled up except that empty inch at the end.  Dip your finger in the water, run your finger along the edge of the wrap, and finish rolling. 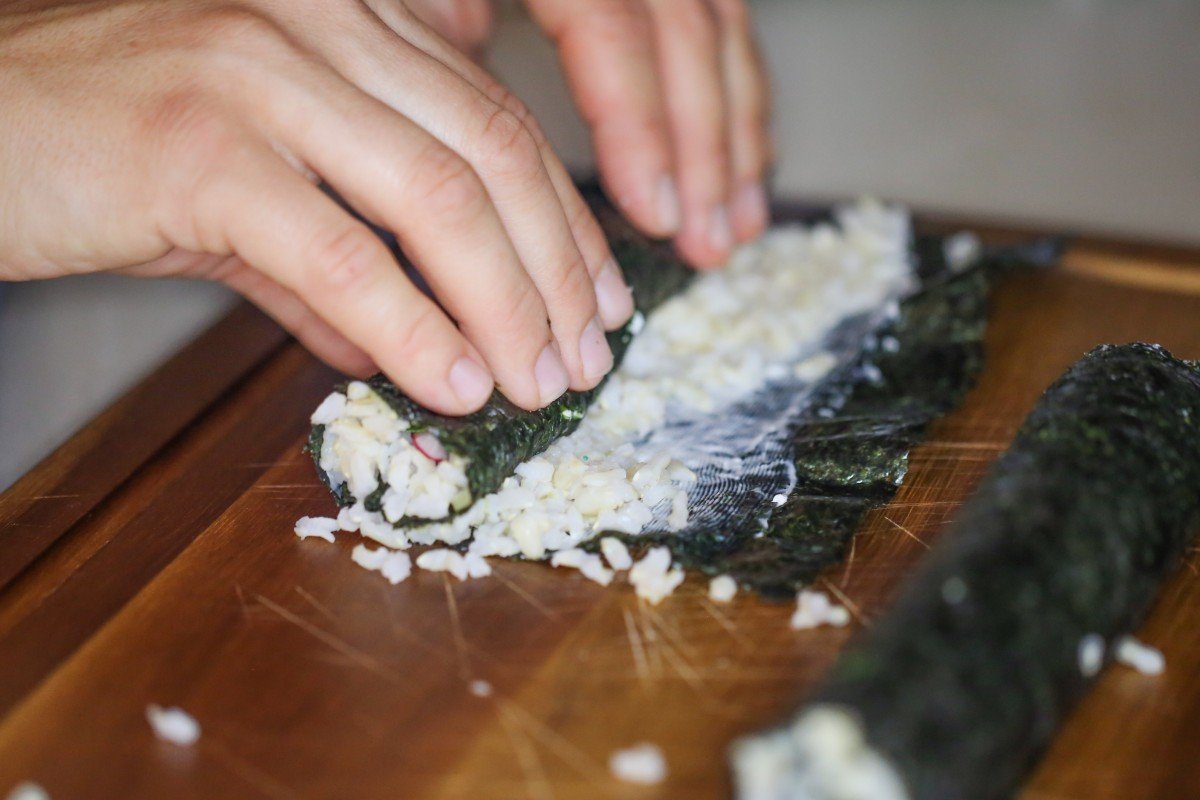 Finally, use a sharp knife to slice the roll.  I start from the middle and work my way to the ends.  And because I don’t use a bamboo mat, my ends are often unsightly, so I feel compelled to eat them on the spot instead of waiting until dinner.  Sometimes it’s tough being the cook. 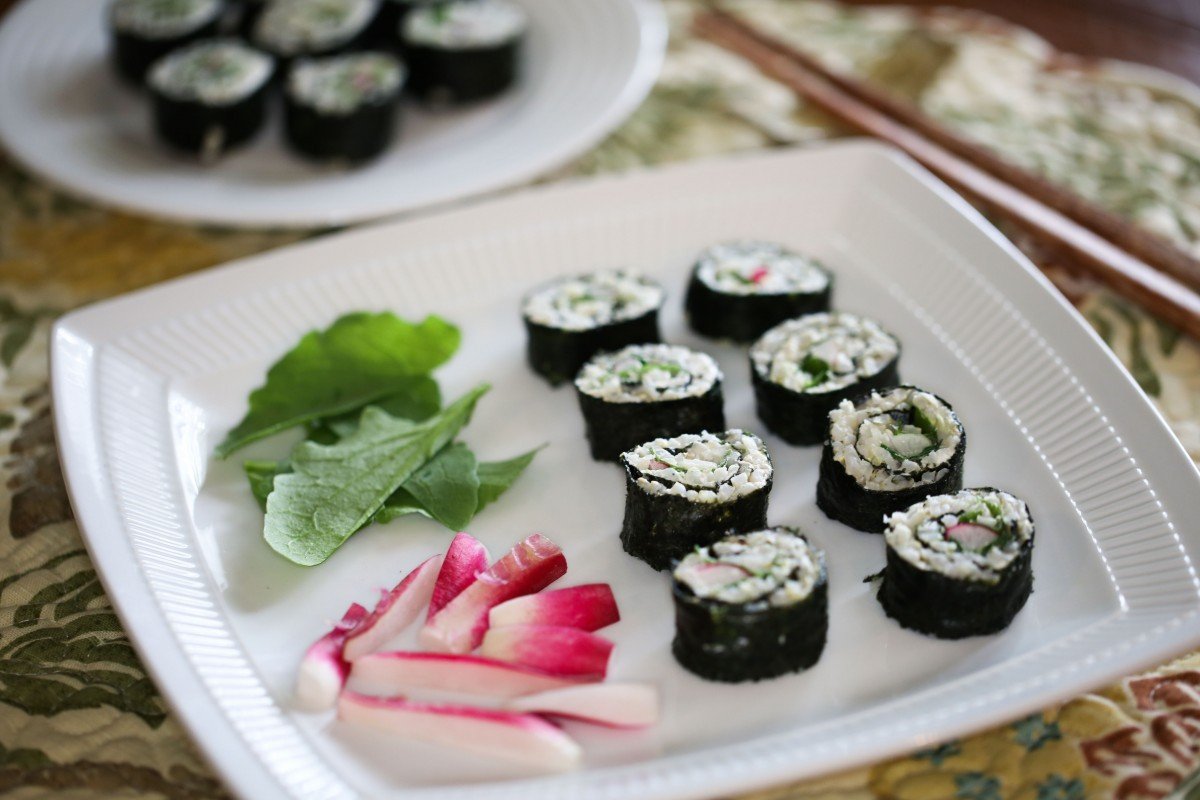 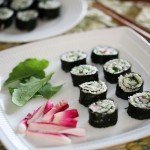