“Eggs crack. Butter pops in a hot pan. Her father is telling an abridged story of their flight, train stations, fearful crowds, omitting the stop in Evreux, but soon all of Marie-Laure’s attention is absorbed by the smells blooming around her: egg, spinach, melting cheese.

An omelette arrives.  She positions her face over its steam . . . The eggs taste like clouds.  Like spun gold.”

That description, from the beautifully written novel All the Light We Cannot See by Anthony Doerr, reveals the sound and taste of an omelette from the perspective of the blind protagonist Marie-Laure after she and her father flee Paris at the beginning of World War II.  They arrive starving at the home of a long-last relative, and they are fed one of the most basic, nourishing meals.

Now while the omelette may be a culinary basic, I’d like to begin with this disclaimer–I’m not French and I’m definitely no Julia Child.  I know, I know, you already knew that, but I’ve followed Child’s directions in The Way to Cook and I still find it quite challenging to make a pretty-looking omelette.   And sometimes you don’t realize this until you’re trying to take a photograph of one for your farm blog.  But that’s okay!  The omelette provides such an easy way to eat your greens that I had to share. 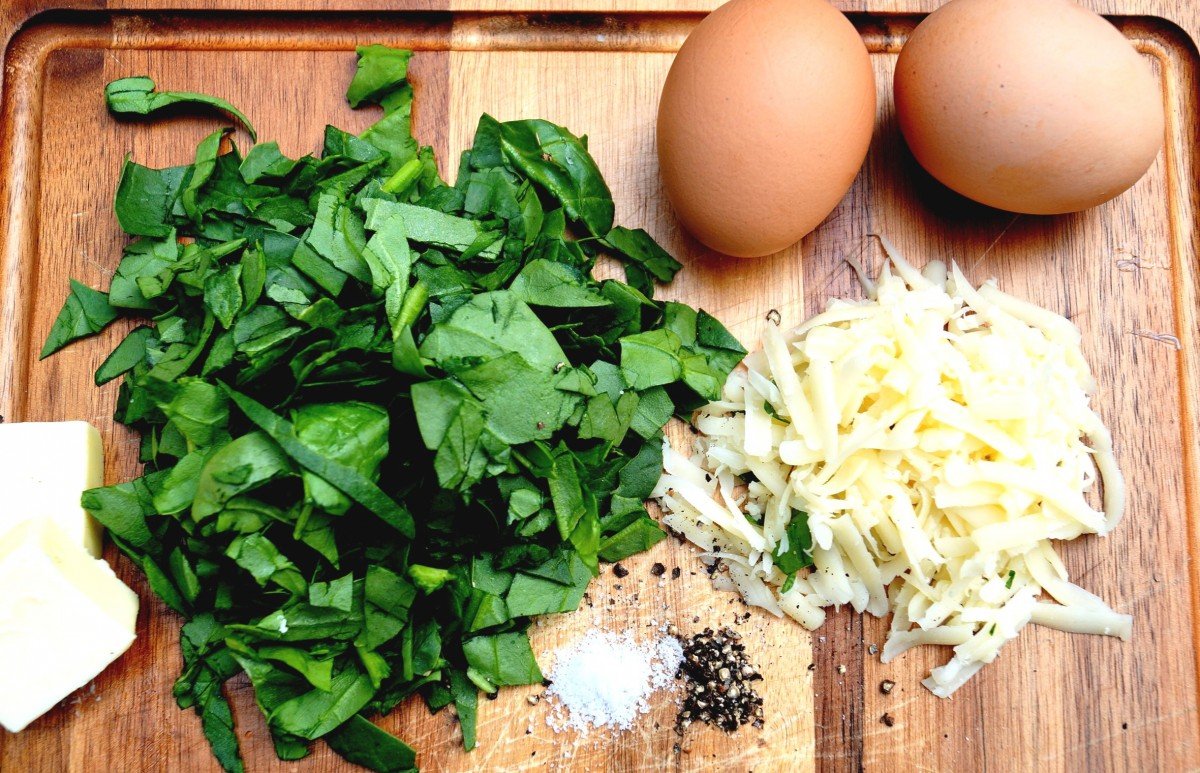 Begin with the freshest ingredients possible (you’re off to a great start with your Perkins’ Good Earth Farm spinach!). Make sure everything is absolutely, positively ready to go before you begin cooking.  The ingredients listed below are for a 1-serving two-egg omelette, so if you’re making this for more than just yourself, multiply ingredients accordingly.

Heat your skillet over medium-high heat.  Child suggests using a no-stick 10-inch frying pan.  Since I don’t have one of those, I used my cast iron skillet, which is kind of awkward and heavy for making an omelette, but it works (sort of).

Heat one tablespoon of butter in the skillet.  Once it begins to bubble, throw in your greens and garlic and cook for about 20 seconds, just until the spinach is wilted.  Spoon the greens and garlic into a bowl and set aside.  (If you’re making this for a group, cook all your spinach and garlic at once.)

With my cast iron skillet, I leave the heat at medium-high.  If using the skillet recommended by Child, she says “to set the pan over highest heat.”  Add another tablespoon of butter, wait for it to bubble (Child–“Watch the butter carefully–when the foam begins to subside and the butter just begins to color”), pour the eggs into the middle of the skillet.

Now, for those of you who’ve never made an omelette, I’m just going to quote Child here for a bit, because, really, she explains this so well!

“At once shake and swirl the pan by its handle to distribute the eggs over the surface, then hold it still over heat for 2-3 seconds, to form a film of coagulated egg on the bottom of the pan.”

Quick break.  Here’s where you QUICKLY scatter the spinach, garlic, and Swiss cheese over the eggs.  Back to Child.

“Now, holding the pan by its handle, start jerking it toward you–thus throwing the egg mass against the far edge of the pan.”  (See why this is challenging in a cast-iron skillet?  I need to do more push-ups or planks or something.)  “Keep jerking roughly, gradually tilting the far edge of the pan over the heat as the omelette begins to roll over on itself.  Push any stray egg into the mass with a spatula, if necessary.  When nicely formed at the far edge, bang on the handle close the near edge with your left fist and the omelette will begin to curl at is far edge.”

Child has another set of instructions for getting the omelette onto your plate from the skillet, but I merely lifted it out with a spatula and put it on my plate next to a piece of toast slathered with homemade black-cap jam.  Done and yum. 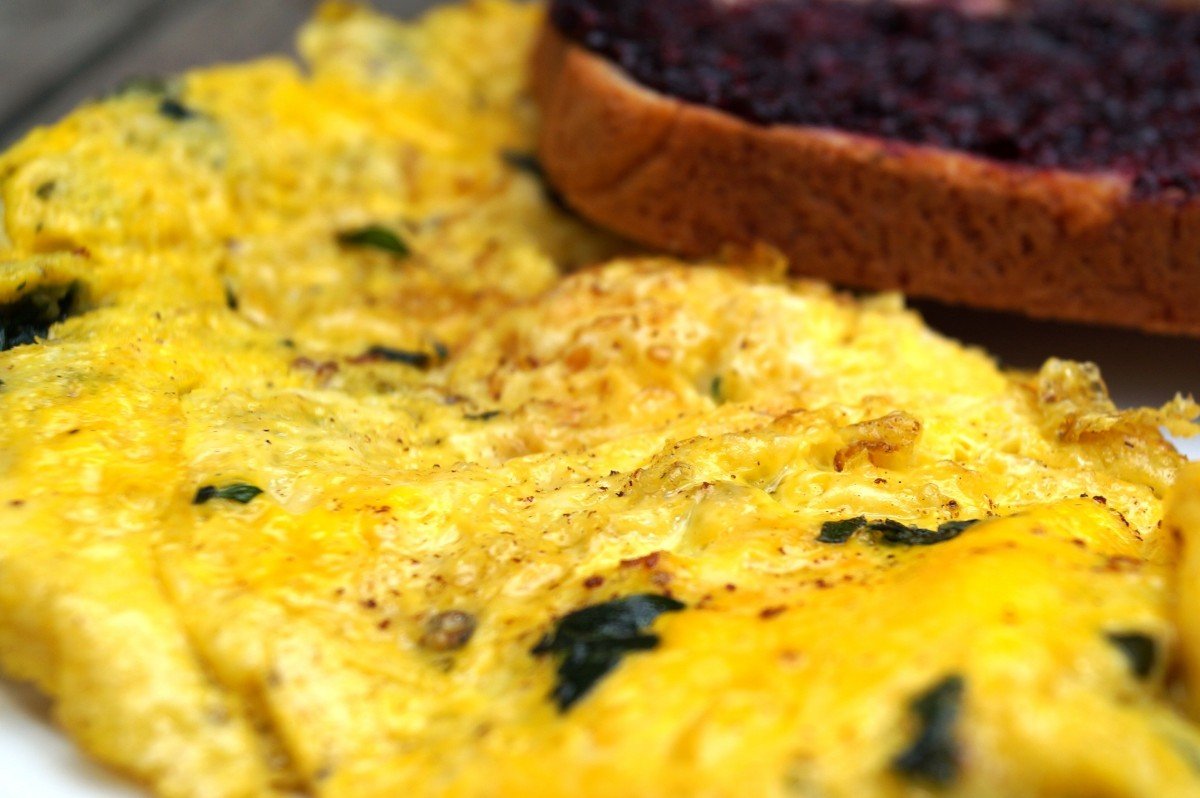 Note: If the whole omelette thing isn’t working out for you, no worries.  Simply lower the heat and turn all those ingredients into a delicious plate of scrambled eggs with spinach and Swiss.  Most of all, enjoy!